What is a Type K thermocouple?

Thermocouples are thermoelectric sensors with two wires made of different materials. These are connected together at one point (measuring point) and a thermoelectric voltage can be measured at their ends (reference junction), which also changes when the temperature changes. This thermoelectric effect is also called Seebeck effect.

Thermocouples differ in the different alloys from which the thermocouple wires are made. Based on these materials, different characteristic curves and measuring ranges can be mapped.

Like platinum sensors, thermocouples are also standardized and can be immersed regardless of the manufacturer. They also have a very fast response time and can be used at very high or very low temperatures. They are inexpensive and come in many different types. Thermocouples also have disadvantages: they are more sensitive than resistance-based temperature probes. Their characteristic curve is not linear. The measuring principle should be known to the user in order to avoid measuring errors.

What is the measuring range and characteristic curve of a Type K thermocouple?

Measuring ranges according to standard: 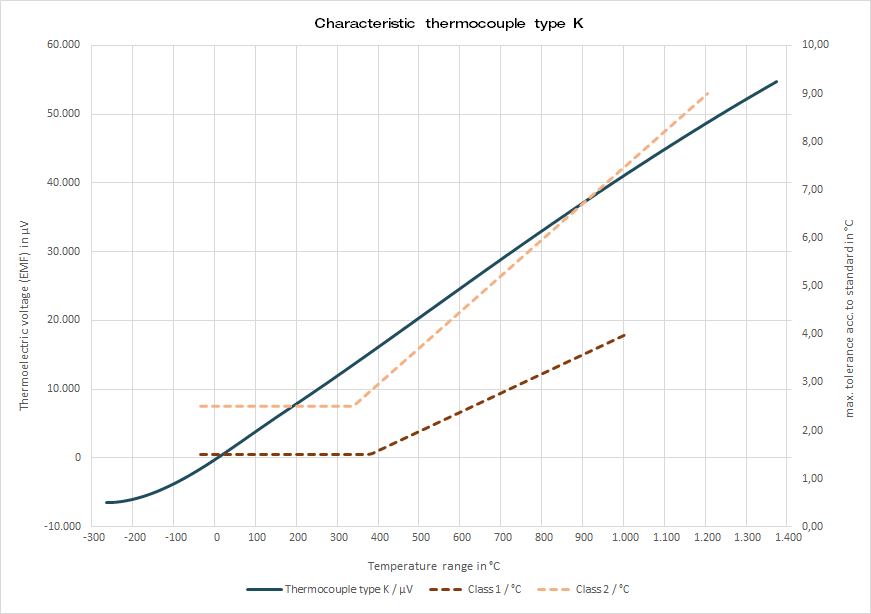 Session:
The session cookie stores your shopping data across multiple page views and is therefore essential for your personal shopping experience.
Notepad:
The cookie enables a notepad to be made available to the user across sessions. This means that the notepad remains available across multiple browser sessions.
Device assignment:
The device mapping helps the store to ensure the best possible display for the currently active display size.
CSRF-Token:
The CSRF token cookie contributes to your security. It strengthens the protection of forms against unwanted hacking attacks.
Login Token:
The login token is used to recognize users across sessions. The cookie does not contain any personal data, but allows personalization across multiple browser sessions.
Cache exception:
The cache exception cookie allows users to read individual content independently of the cache.
Cookies Active Check:
The cookie is used by the website to find out whether cookies are allowed by the site user's browser.
Cookie settings:
The cookie is used to store the site user's cookie settings over multiple browser sessions.
Origin information:
The cookie stores the user's origin page and the first page visited for further use.
Enabled cookies:
Stores which cookies have already been accepted by the user for the first time.
Tracking